This site works best with JavaScript enabled.
Visualizing Autoencoders with Tensorflow.js
NB: This page loads several neural network models and large image atlases which may take time to load on a mobile device.

Loading
The visualization above shows the ways UMAP, TSNE, and the encoder from a vanilla autoencoder reduce the dimensionality of the popular MNIST dataset from 748 to 2 dimensions. Click a button to change the layout, or scroll in to see how images with similar shapes (e.g. 8 and 3) appear proximate to one another in the two-dimensional embedding.

Loading
The visualization above shows the ways the decoder from a vanilla autoencoder projects data from a two-dimensional embedding to a 748-dimensional image shown in color in the lower-right. Click different positions to see how the decoder translates a 2D vector (or pair of x,y coordinates) into an image.

Epochs: 0
Loss: 1.0
Model Input
Model Output
The figure above shows the model architecture of an autoencoder. Click the "Train" button to improve the autoencoder's reconstruction of input images, and click the "Sample" button to show how the model reconstructs a new sample image.

Having discussed the purpose and basic components of an autoencoder, let’s now discuss how to create autoencoders using the Keras framework in Python.

To build a custom autoencoder with the Keras framework, we’ll want to start by collecting the data on which the model will be trained. To keep things simple and moderately interesting, we’ll use a collection of images of celebrity faces known as the CelebA dataset. One can download and prepare to analyze 20,000 images from this dataset with the following:

Running these lines will create a directory named celeba-sample that contains a collection of 20,000 images with uniform size (218 pixels tall by 178 pixels wide), and will read all of those images into a numpy array X with shape (20000, 218, 178).

With this dataset prepared, we’re now ready to define the autoencoder model. Happily, the Keras framework makes it possible to define an autoencoder including the encode and decode steps discussed above in roughly 25 lines of code:

Let’s step through the code above a little. First, we import the building blocks with which we’ll construct the autoencoder from the keras library. Then we define the encoder, decoder, and “stacked” autoencoder, which combines the encoder and decoder into a single model. Each of these models is defined inside a single class that takes as input several named parameters which collectively define the hyperparameters that will be used to define the model. The inline comments above detail how each line contributes to the construction of the encoder, decoder, and stacked autoencoder.

Now that the autoencoder is defined, we can “train” it by passing observations from the numpy array X through the model. Note that we hold out some images from X to use as validation data:

If you run that line, you should see that the model’s aggregate “loss” (or measure of the difference between model inputs and reconstructed outputs) decreases for a period of time and then eventually levels out. Once the loss starts to level out, you can sometimes try to decrease the model’s learning rate and continue training:

Once the model’s loss seems to stop diminishing, we can treat the model as trained and ready for action.

Examining the latent space, you should find that input images are roughly normally distributed around some central point, as in the following example (note however that your visualization may look slightly different due to the random initialization of the autoencoder’s weights): 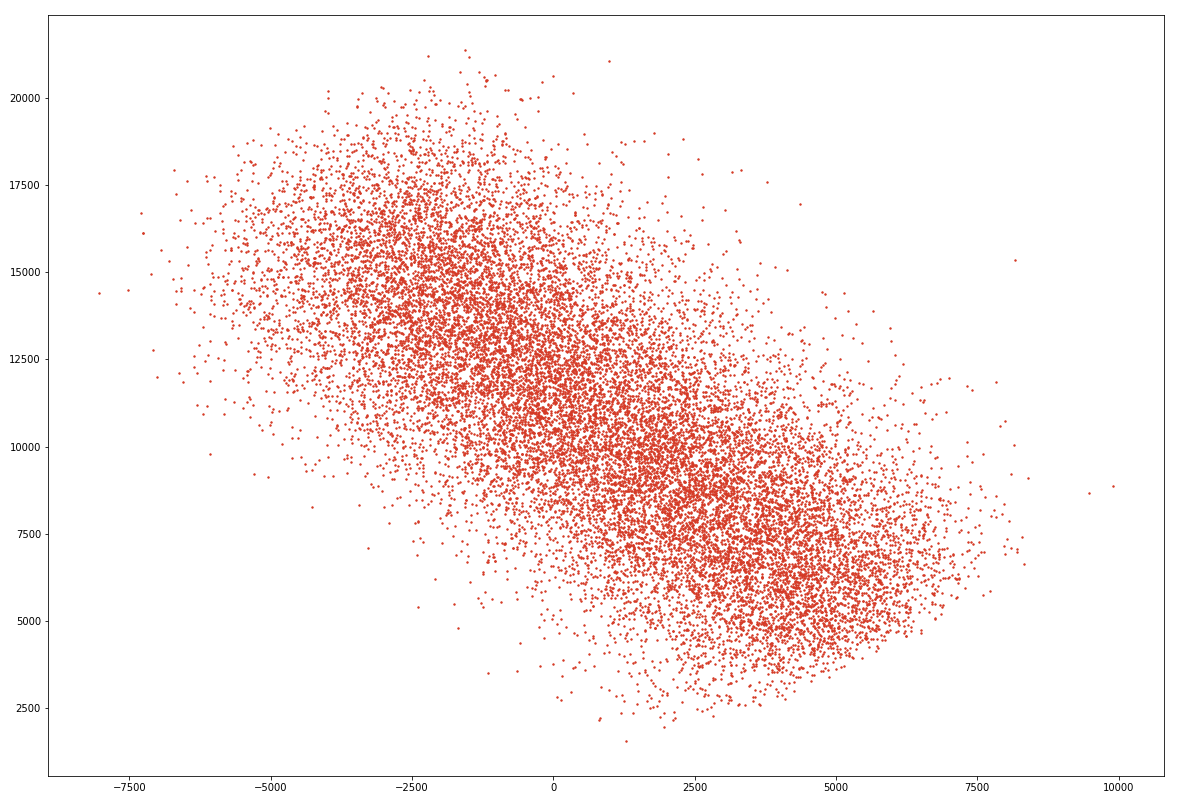 The plot above represents each image from the CelebA data sample projected into the two-dimensional latent space discovered by the autoencoder. Each point in this plot represents the position of a single image in the latent space.

The plot above shows how each image in the input dataset X can be projected into the two-dimensional space created by the middlemost layer of the autoencoder we defined above. What’s arguably more interesting, however, is the decoder’s ability to take positions from that two-dimensional space and project them back up into full-fledged images. Using this ability, one can create new images that are conditioned by, but non-identical to, the input images on which the autoencoder was trained. Let’s visualize some of the outputs from the decoder next.

Sampling from the Latent Space

Having trained the autoencoder, we can now pick a random location in the two-dimensional latent space and ask the decoder to transform that two-dimensional value into an image: 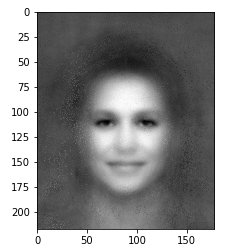 Sampling from different regions of the latent space will create rather different faces. To make this sampling process a little more snappy, let’s use Tensorflow.js to create a realtime, interactive decoder.

To explore the autoencoder’s latent space in realtime, we can use Tensorflow.js, a stunning open source project built by the Google Brain team. To get started, install the package with pip install tensorflowjs==3.8.0. That command will install a package that includes the resources needed to save a Keras model to disk a format with which the Tensorflow.js clientside library can interact. After that package finishes installing, you should have tensorflowjs_converter on your system path. Using that binary, one can save the decoder defined above to disk by running:

This command will create celeba-decoder.hdf5 and celeba-decoder-js, the latter of which is a directory full of files that collectively specify the decoder’s internal parameters. Once those files are saved to disk, one can load the decoder and sample from the position 10, 50 in the latent space (just as we did above) with the following HTML:

To try this snippet out, save the HTML above to a file named index.html and start a local webserver with either python -m http.server 8000 (Python 3) or python -m SimpleHTTPServer 8000 (Python 2). Then open a web browser to the port on which the server you just started is running, namely http://localhost:8000 and inspect the browser console. If you do so, you should see that the lines above log an array of 38,804 values, one value for each pixel in the 178 * 218 pixel image sampled from position 10, 50 in the latent space.

If all this came together, you’re ready to create some interactive models with Tensorflow.js! To do so, we just need to put together a few lines of code that can visualize the array of data returned by the model.predict(y).dataSync() call above. The following will accomplish this goal fairly succintly:

The code above creates an interactive widget like the following:

By interacting with the two-dimensional range slider, users can explore the autoencoder’s latent space, sampling from a continuous range of latent space positions and examining the image the decoder generates for each. That’s all it takes to visualize a latent space with Tensorflow.js!

I want to thank Chase Shimmin, a brilliant physicist and bona-fide machine learning expert, for helping me take a deeper dive into autoencoders. The notes in this post are my humble attempt to circulate some of the insights Chase shared with me among a larger audience.