Several months ago, I worked with Professor David Corso and his team at the University of Michigan on an MDP Project to subdivide newspaper articles from full newspaper sheets. Our project revolved around analyzing a newspaper sheet, identifying each of the articles within that sheet, and saving each article to a unique file. The purpose of the exercise was to allow downstream applications to run OCR on the subdivided images to improve OCR quality and ultimately improve search relevancy.

The case study discussed below grows out work I pursued when the British Library asked if Yale’s Digital Humanities Lab could help process a large image collection in their possession. Their data consisted of scrapbooks wherein each page/image contained several advertisements for eighteenth-century plays. Here’s a sample image: 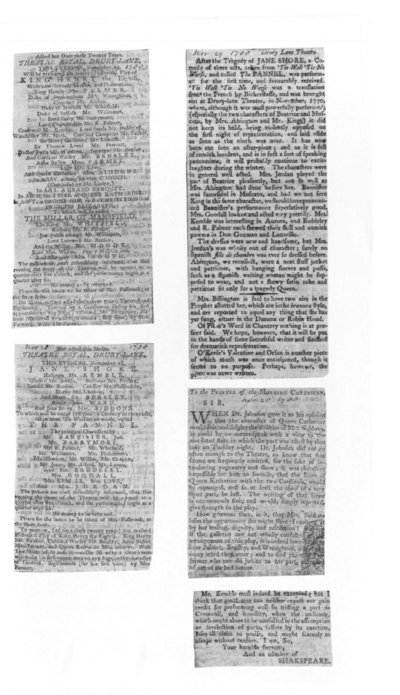 Given an image such as the above, they wanted to save each of the clippings from that page to its own file: 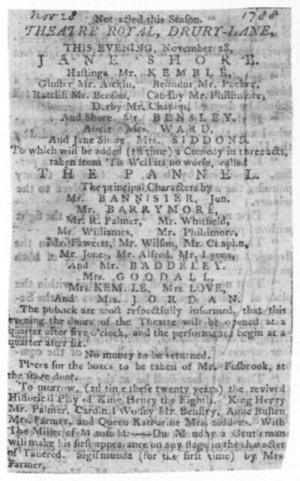 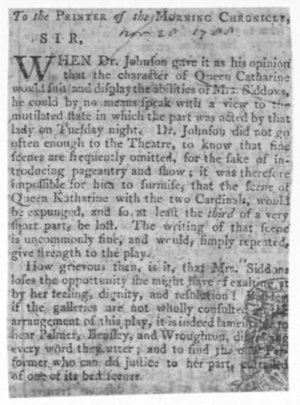 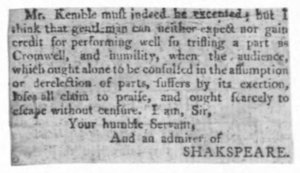 This is a fairly tidy example of an image segmentation task, and one that our lab achieved quickly with Python’s scikit-image package. The write-up below documents the approaches we leveraged for this task.

Converting an image file to a pixel matrix

To get started, one must first install skimage. To do so, just open a terminal and type pip install scikit-image. From there, one can read a jpg or jp2 into RAM with a script such as the following:

If you do so, you’ll instantiate an im object. If you print that object, you’ll see it’s a matrix. The shape of this matrix depends on the input image type, as discussed in the relevant scipy and skimage docs. In the case of the grayscale images above, the im object is a 2d matrix, or array of arrays. Each subarray represents one row of pixels in the image, and each integer in a given subarray represent the luminescence of a pixel in the given row in 8bit scale (0 = black, 255 = white):

One can run a wide range of numerical operations on this image pixel matrix in order to achieve different tasks. Below we’ll look at two approaches one can use to save each subimage in a composite image to its own file.

One approach that’s often useful in image processing is “pixel dilation.” This term refers to the process of measuring the total amount of luminescence for each row and each column of an image. Measuring these values can provide helpful inputs with which one can automatically crop or even segment image elements. 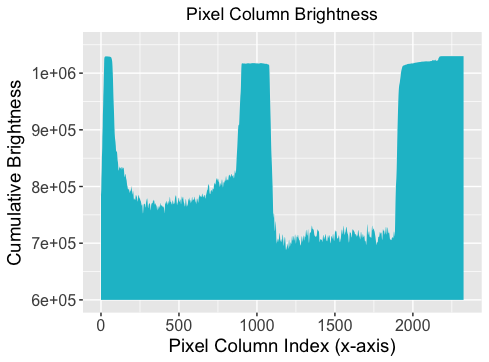 Examining this chart, we can tell there are two dark bands of pixels within the image on the left: one that stretches from roughly pixels 100-800 in the image, and another that stretches from roughly 1200-1900. Given just this representation of the image’s contents, one would have enough information to partition the image into two regions. From there, one could repeat the procedure, this time dilating pixels along the y axis and again splitting the image based on the resulting blocks within the pixel histogram.

To generate pixel histograms such as the one above for the x and y axes of an image matrix named im, one can run:

The sample image discussed above is an 8bit grayscale image. Each pixel is represented as an integer value between 0 and 255, where 0 = perfect black and 255 = perfect white. One way to simplify image processing for this kind of color scale is to “binarize” the image, or transform the image such that each pixel is either black or white.

To binarize a grayscale image, we simply need to identify a threshold value between 0 and 255. Once the threshold is established, we can identify each pixel with a boolean (True/False) value that indicates whether the given pixel is black/white. As it happens, the threshold_otsu() function in skimage provides a helper for determining an ideal threshold value for binarizing a grayscale image, and the clear_border() method provides a helper for applying a binarized image mask to an image:

After binarizing a grayscale image, one can use the label() function in skimage to partition the image into contiguous areas of self-similar pixel regions:

With these segment assignments in hand, one should filter out the “noise” segments, or the segments to which a small number of pixels have been assigned. These segments are the result of noise in the input image, and can be disregarded in the following way:

Having identified all of the images we wish to partition from the composite image, all that’s left to do is to save those images to disk.

This post has attempted to show some of the ways one can approach some simple image segmentation problems with scikit-image. If you have any troubles with the snippets above, feel free to consult the full source code used to process the samples above. If you get interested this line of analysis, feel free to drop me a note–I’d be curious to hear what brings you to image segmentation!