Oliver Goldsmith, one of the great poets, playwrights, and historians of science from the Enlightenment, was many things. He was ‘an idle, orchard-robbing schoolboy; a tuneful but intractable sizar of Trinity; a lounging, loitering, fair-haunting, flute-playing Irish ‘buckeen.’’ He was also a brilliant plagiarist. Goldsmith frequently borrowed whole sentences and paragraphs from French philosophes such as Voltaire and Diderot, closely translating their works into his own voluminous books without offering so much as a word that the passages were taken from elsewhere. Over the last several months, I have worked with several others to study the ways Goldsmith adapted and freely translated these source texts into his own writing in order to develop methods that can be used to discover crosslingual text reuse. By outlining below some of the methods that I have found useful within this field of research, the following post attempts to show how automated methods can be used to further advance our understanding of the history of authorship.

In order to identify the passages within Goldsmith’s corpus that were taken from other writers, I decided to train a machine learning algorithm to differentiate between plagiarisms and non-plagiarisms. To distinguish between these classes of writing, John Dillon and I collected a large number of plagiarized and non-plagiarized passages within Goldsmith’s writing, and provided annotations to identify whether the target passage had been plagiarized or not. Here are a few sample rows from the training data:

Given this training data, the goal was to identify some features that commonly appear in Goldsmith’s plagiarized passages but don’t commonly appear in his non-plagiarized passages. If we could derive a set of features that differentiate between these two classes, we would be ready to search through Goldsmith’s corpus and tease out only those passages that had been borrowed from elsewhere.

Because a plagiarized passage can be expected to have language that is similar but not necessarily identical to the language used within the plagiarized source text, I decided to test some fuzzy string similarity measures. One of the more promising leads on this front was adapted from the work of Salha M. Alzahrani et al. [2012], who has produced a number of great papers on plagiarism detection. The specific similarity measure adapted from Alzahrani calculates the similarity between two passages (call them Passage A and Passage B) in the following way:

To prepare the data for this algorithm, I used the Google Translate API to translate French texts into English, the Big Huge Labs Thesaurus API to collect synonyms for each word in Passage B, and the NLTK to clean the resulting texts (dropping stop words, removing punctuation, etc.). Once these resources were prepared, I used an implementation of the algorithm described above to calculate the ‘similarity’ between the paired passages in the training data. As one can see, the similarity value returned by this algorithm discriminates reasonably well between plagiarized and non-plagiarized passages: 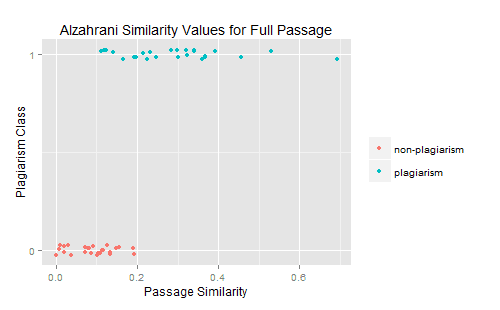 In order to investigate how sensitive this similarity method is to passage length, I iterated over all sub-windows of n words within the training data, and used the same similarity method to calculate the similarity of the sub-window within the text. When n is five, for instance, one would compare the first five words of Passage A to the first five from Passage B. After storing that value, one would compare words two through six from Passage A to words one through five of Passage B, then words three through seven from Passage A to words one through five of Passage B, proceeding in this way until all five-word windows had been compared. Once all of these five-word scores are calculated, only the maximum score is retained, and the rest are discarded. The following plot shows that as the number of words in the sub-window increases, the separation between plagiarized and non-plagiarized passages also increases: 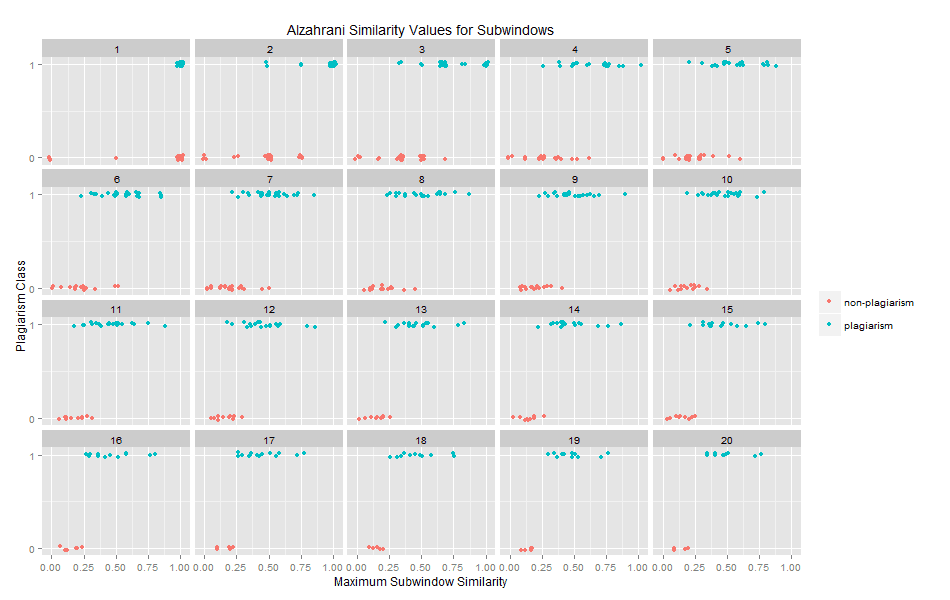 Although the method discussed above provides helpful separation between plagiarized and non-plagiarized passages, it reduces word pairs to one of three states: equivalent, synonymous, and irrelevant. Intuitively, this model feels limited, because one senses that words can have degrees of similarity. Consider the words small, tiny, and humble. The thesaurus discussed above identifies these terms as synonyms, and the algorithm described above essentially treats the words as interchangeable synonyms. This is slightly unsatisfying because the word small seems more similar to the word tiny than the word humble.

To capture some of these finer gradations in meaning, I called on Word2Vec, a method that uses backpropagation to represent words in high-dimensional vector spaces. Once a word has been transposed into this vector space, one can compare a word’s vector to another word’s vector and obtain a measure of the similarity of those words. The following snippet, for instance, uses a cosine distance metric to measure the degree to which tiny and humble are similar to the word small:

Running this script returns [[ 0.71879274]] and [[ 0.29307675]] respectively, which is to say Word2Vec can recognize that the word small is more similar to tiny than it is to humble. Because Word2Vec allows one to calculate these fine gradations of word similarity, it does a great job calculating the similarity of passages from the Goldsmith training data. The following plot shows the separation achieved by running a modified version of the ‘Alzahrani algorithm’ described above, using this time Word2Vec to measure word similarity: 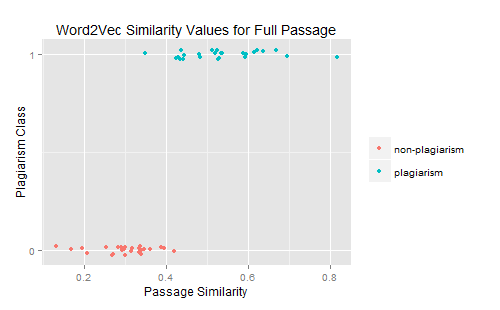 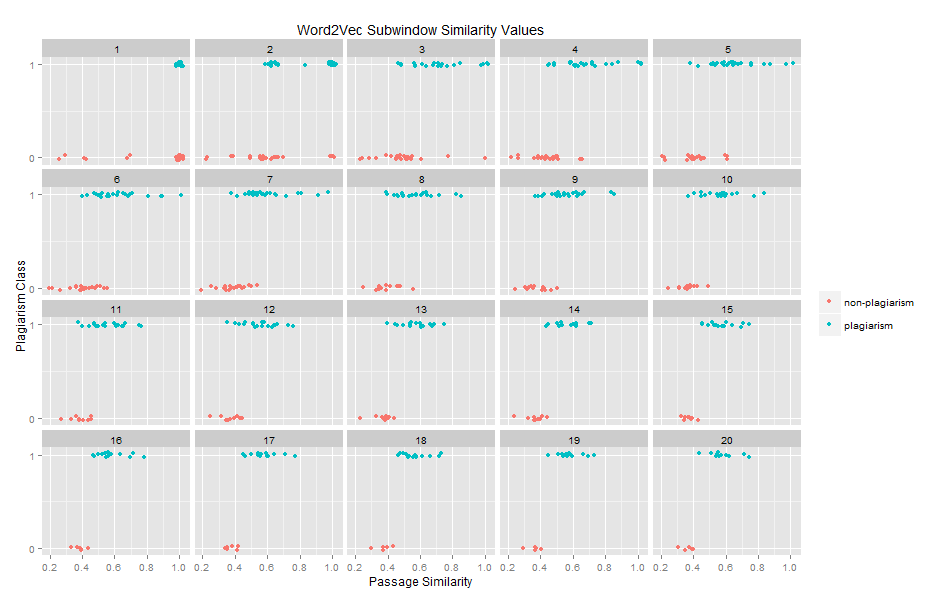 Much like the semantic features discussed above, syntactic similarity can also serve as a clue of plagiarism. While a thoroughgoing pursuit of syntactic features might lead one deep into sophisticated analysis of dependency trees, it turns out one can get reasonable results by simply examining the distribution of part of speech tags within Goldsmith’s plagiarisms and their source texts. Using the Stanford Part of Speech (POS) Tagger’s French and English models, and a custom mapping I put together to link the French POS tags to the universal tagset, I transformed each of the paired passages in the training data into a POS sequence such as the following:

Using these sequences, two similarity metrics were used to measure the similarity between each of the paired passages in the training data. The first measure (on the x-axis below) simply measured the cosine distance between the two POS sequences; the second measure (on the y-axis below) calculated the longest common POS substring between the two passages. As one would expect, plagiarized passages tend to have higher values in both categories: 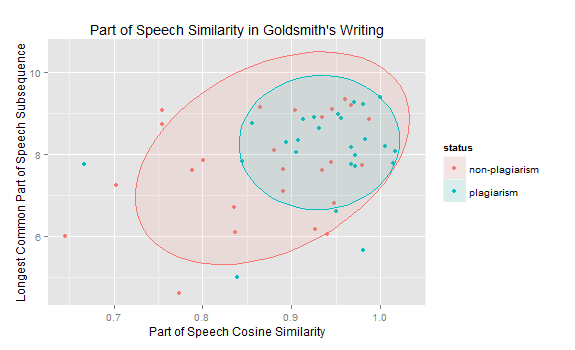 From the similarity metrics discussed above, I selected a bare-bones set of six features that could be fed to a plagiarism classifier: (1) the aggregate ‘Alzahrani similarity’ score, (2) the maximum six-gram Alzahrani similarity score, (3) the aggregate Word2Vec similarity score, (4) the cosine distance between the part of speech tag sets, (5) the longest common part of speech string, and (6) the longest contiguous common part of speech string. Those values were all represented in a matrix format with one pair of passages per row and one feature per column. Once this matrix was prepared, a small selection of classifiers hosted within Python’s Scikit Learn library were chosen for comparison. Cross-classifier comparison is valuable, because different classifiers use very different logic to classify observations. The following plot from the Scikit Learn documentation shows that using a common set of input data (the first column below), the various classifiers in the given row classify that data rather differently:

In order to avoid prejudging the best classifier for the current task, half a dozen classifiers were selected and evaluated with hold one out tests. That is to say, for each observation in the training data, all other rows were used to train the given classifier, and the trained classifier was asked to predict whether the left-out observation was a plagiarism or not. Because this is a two class prediction task (each observation either is or is not an instance of plagiarism), the baseline success rate is 50%. Any performance below this baseline would be worse than random guessing. Happily, all of the classifiers achieved success rates that greatly exceeded this baseline value: 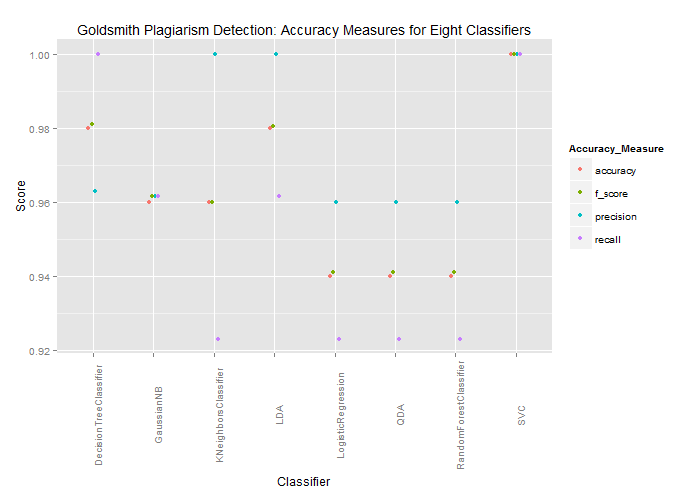 Generally speaking, precision values were higher than recall, perhaps because some of the plagiarisms in the training data were fuzzier than others. Nevertheless, these accuracy values were high enough to warrant further exploration of Goldsmith’s writing. Using the array of features discussed above and others to be discussed in a subsequent post, I tracked down a significant number of plagiarisms that were not part of the training data, including the following outright translations from the Encyclopédie:

Samuel Johnson once observed that Oliver Goldsmith was “at no pains to fill his mind with knowledge. He transplanted it from one place to another; and it did not settle in his mind; so he could not tell what was his in his own books” (Life of Johnson). Reading the borrowed passages above, one can perhaps understand why Goldsmith struggled to recall what he had written in his books–much of his writing was not really his. As scholars continue to advance the art of detecting textual reuse, we will be better equipped to map these borrowed words at larger and more ambitious scales. For the present, writers like Goldsmith offer plenty of data on which to hone those methods.

This work has benefitted enormously from conversations with a number of others. Antonis Anastasopoulos, David Chiang, Michael Clark, John Dillon, and Kenton Murray of Notre Dame’s Text Analysis Group, and Thom Bartold, Dan Hepp, and Jens Wessling of ProQuest offered key analytic insights, and Mark Olsen and Glenn Roe of the University of Chicago’s ARTFL group shared essential data. I am grateful for the generous help each of you has provided. Code is available on GitHub.